Bt Cotton – The Hype Vs Reality

Bt cotton is a genetically modified cotton plant, in which genes from a bacterium called Bacillus thuringiensis (Bt) have been inserted, on the ostensible grounds that a new pesticide that will be produced inside the cotton plant will kill a certain set of pests that cause damage to the cotton crop, thereby eliminating the use of external pesticide sprays by farmers. Environmentalists and farmers’ unions tried to stop the introduction of Bt cotton in India – they predicted that bollworms which the Bt cotton technology targets, will develop resistance, and that there are alternatives to non-chemical cultivation of cotton without resorting to the use of GM cotton seeds.

However, in March 2002, Bt cotton, the first genetically modified crop in India, was officially approved for commercial cultivation, following widespread cultivation earlier to this from illegal leakages of the seed. After its official approval, it was introduced in six states, and approval extended to some more states after a few years. Today, it is estimated that more than 95% of India’s cotton area is planted with GM cotton seeds. The GM cotton planted in India is overwhelmingly that of Monsanto’s proprietary technology called Bollgard II, after the initial introduction of Bollgard I in the market. There is also unapproved and illegal cultivation (because of illegal marketing of seeds) of Herbicide Tolerant Bt cotton, which withstands the use of chemical herbicides on the crop.

At present, Bt cotton hybrids expressing six events, with different combination of 3 Bt genes, have been legally commercialized in India. By 2014, there were 1500 Bt cotton hybrids in the market! The wide-scale adoption of Bt cotton has been due to various reasons including aggressive promotion, often with the involvement of state agencies, wide publicity to the initial short-term benefits with respect to bollworm incidence and frustration of farmers with pesticide usage, and unavailability of non-Bt seed. This has been wrongly used as an indicator of its successi.

The negative impacts of Bt cotton have been documented and articulated including by government scientists – nutrient depletion, impact on soil health, pest resistance, emergence of new pests.

The latest in the series of problems is the devastation caused during this year and last year due to widespread attack by pink bollworm. Shocking footage of farmers ‘harvesting’ pink bollworms at the ginning stage stands testimony to this.

It is by now clear that the steepest yield increases in India’s cotton have happened in years when Bt cotton had not spread large, between 2002 and 2006. 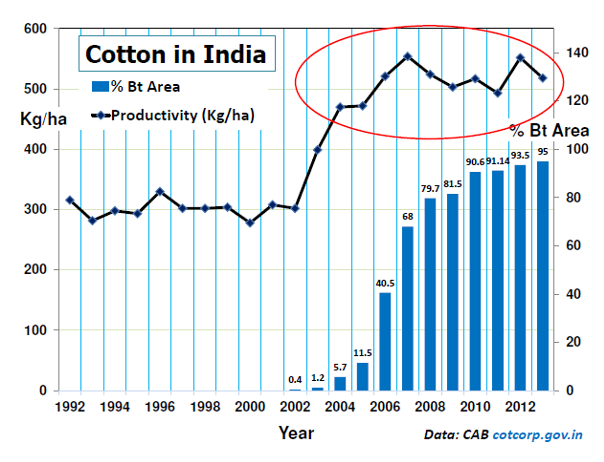 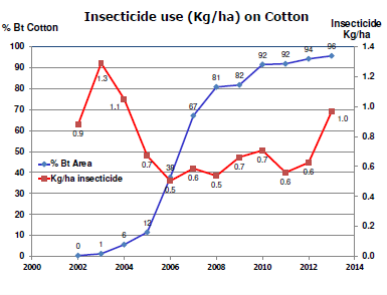 Meanwhile, farmer suicides did not come down. In fact, most farm suicides continue to be in the cotton-growing regions of the country, and that too of Bt cotton growers.

Right now, governments are busy promoting non-GM desi cotton with farmers, and availability of seed has become a major challenge.

In short, the claims of Bt cotton are now known to be false and the predictions of those opposing Bt cotton have come true. In effect, an irresponsible experimentation was unleashed on poor cotton farmers of India, pushing them into deeper distress.

Do we want a repetition of this story in other crops, that too food crops?

For more information check the reports in the Resources section. The graphics in this page are from a presentation by Dr K R Kranthi, Central Institute for Cotton Research.

We explain here our understanding of adoption of Bt cotton in India and how it cannot be construed to be a success of the GM technology.