Many reasons to say NO to Delhi University’s GM MUSTARD 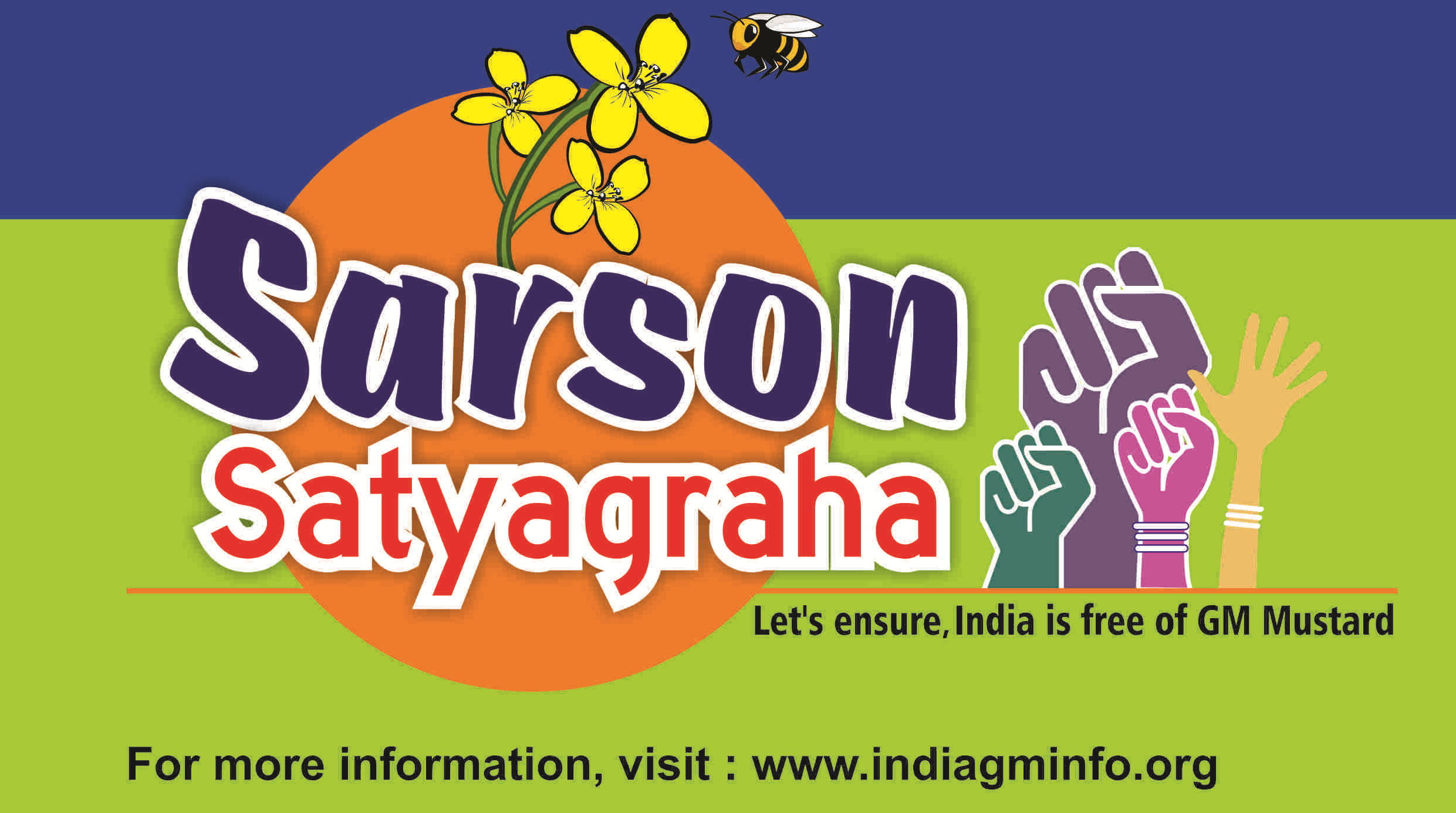 Do you remember how, in 2010, citizens collectively ensured that Bt brinjal, (a genetically modified (GM) food crop) was stopped from entering our plates and farms? The Government of India placed an indefinite moratorium on the release of Bt brinjal for commercial cultivation. Back then, the Government said it was placing the GMO under an indefinite moratorium being “responsive to society and responsible to science”. On Bt brinjal, the fresh analysis taken up by the Supreme Court’s TEC shows us that the Government of India’s decision to place the GMO on an indefinite moratorium was scientific and correct. Now, just 15 years of Bt cotton cultivation in India the hype and lies around this GMO have been exposed. The insect for which Bt cotton was created has developed resistance and farmers are using as much pesticides as before on cotton crop in the country. One multi-national corporation (Monsanto) has gained monopolistic control over the cotton seed market in India. Farmers committing suicides are mostly (Bt) cotton farmers. Despite this, the Government now plans to approve another GMO, a food crop, MUSTARD (to be exact, three different types of GM mustard). The application for approval is in an advanced stage of processing by the regulators. After the moratorium on Bt brinjal, there is in fact more scientific evidence that has emerged to show that GMOs are unsafe and unwarranted. Here are reasons why we should say NO to GM mustard, NO to all GMOs in our food, farming and environment and to ensure that we are not made lab rats in an irresponsible and irreversible experiment.

Transgenic technology is unsafe and irreversible:

Genetic Engineering is an unnatural and imprecise breeding technology with living organisms – there is much scientific evidence to show that it is an unstable, unpredictable, irreversible and uncontrollable technology. Environmental release of GMOs increases risk in agriculture, and takes away choices both for farmers and consumers (through contamination, market monopolies, inability to keep GM segregated from non-GM etc.). Almost all developed countries except the USA and Canada have by and large rejected GMOs in farming (it is noteworthy that 17 of the 20 most developed countries do not cultivate GM crops). A compilation of scientific papers on adverse impacts of GM crops/foods is available at: http://indiagminfo.org/?p=657.

There is evidence that various tests that are required to assess risks and impacts have not been performed. Analysis done by concerned independent experts, based on access to limited information available, clearly shows that data analysis is poor and safety conclusions are not borne out by data (http://indiagminfo.org/?p=1327). Moreover, yield increase claims, the very basis for seeking an approval for this GMO, are rigged and wrong. Solid evidence exists that by deliberately misleading and unscientific tests (vis-à-vis old, low-performing varieties), favourable results were obtained for GM mustard. Several better performing non-GM hybrids and ‘varieties’ are already available for farmers. There are also other methods for increasing yields, other than seed-based technologies.

Numerous instances from all over the world for GMOs as such and rapeseed (similar to mustard) in particular clearly indicate that containment of GM mustard will be impossible, and contamination inevitable (both biological and physical). Contamination will imply death knell for organic farmers, and consumers’ right to know what is in their food, Right to safe food and informed choices will be violated.

GM Mustard is a backdoor entry for HT crops:

The current set of 3 mustard GMOs are all herbicide-tolerant crops. But the GMO application does not declare them so, nor test them in the context of HT crops. The risk assessment has not taken into account this feature or the consequent increased use of herbicides, or any combined effects. Rapid emergence of “Super-Weeds” (weeds that cannot be killed by herbicides anymore) due to the extensive use of herbicide tolerant GM crops is well documented, so are the impacts on beneficial non-target organisms like bees and butterflies and soil microbes. Use of herbicide tolerant crops results in more herbicide use, higher toxic residues in food, prevents mixed cropping, damages crops in neighbouring farms, and destroys income that can be earned by manual weeding by women agricultural workers thereby damaging their livelihoods. It ignores the fact that most weeds are in fact food, fodder or medicines especially for the poor. Introducing a HT GM crop, that too without risk assessment, will definitely pave way for the plundering by many multinational companies which are waiting to introduce HT crops, to make money on both seeds and chemicals. Many Committees in India have explicitly recommended against HT crops keeping all the above in view. Similar GM mustard by Bayer’s subsidiary was rejected by our regulators in 2002, and the same reasons hold good to this application too.

State Governments, including leading mustard-growing states, do not want even field trials - Farmers Unions, Scientists and others have objected strongly against GM mustard:

Major mustard growing states in India like Rajasthan (which destroyed trials mid-way), Madhya Pradesh and Haryana did not even allow field trials. In India, agriculture being a State subject as per our Constitution, rejection of state governments is an important factor to consider. More than 50 large and active farmer unions of the country have already put out statements against GM mustard. Scores of scientists have written to the government against permitting any release of GM mustard. Ordinary citizens have been writing in the thousands to the government resisting the approval of GM mustard.

India is a Centre of Diversity for Mustard:

As in the case of Brinjal, India is a Centre of Diversity for Mustard. Starting from the 2004 report of an Agriculture Ministry’s Task Force led by Dr Swaminathan to the 2013 report of a Supreme Court Technical Expert Committee, there are express recommendations against doing GM experiments with crops for which we are the Centre of Origin/Diversity. Mustard is used both as food and medicine in Ayurveda and GM mustard’s impacts on Indian Systems of Medicine have not been assessed.

Honey industry is a sunrise industry in India, and mustard is one of the major sources for Indian bee keepers. Bee keeping with mustard increases yields of mustard by about 20-25%, even as it supports honey production and additional income for the beekeeper. GM mustard has potential adverse impacts on honey bees.

Release of high yielders non-significant in their contribution to increase production of oilseeds and reduce oil import:

The applicants of this GM mustard claim that approval for their transgenics will lead to increase in India’s yields and production of rapeseed mustard and will thereby bring down the country’s edible oil import bill. However, official records show that release of (non-GM) hybrids into the market has not resulted in either production increases or in import bill declines.

The biotech regulator has not cleaned itself of conflict of interest, with one member from the GM applicant team also being a GEAC member. Test protocols were prescribed by crop developers for themselves. Meanwhile, data is shrouded in secrecy. Test results have not been shared in public despite Supreme Court and Central Information Commission Orders that require the regulators to put out data for public scrutiny.

This Delhi University GM mustard is being pushed as a public sector GMO and therefore a desirable choice. However, when it comes to biosafety, public sector GMOs carry the same risks as private sector GMOs! It is clear that this GM mustard is a Trojan Horse for other GMOs. Meanwhile, GEAC, in its July 2016 meeting, stated that it is responsible only for biosafety; all other aspects like need for the GMO, citizen choices, evaluation of other alternatives, socio-economic impacts assessment etc is not its responsibility. Even in terms of biosafety assessment, there is ample evidence that showcases the apathetic, unscientific and shoddy assessment that regulators take up. This means that there is no one who has overall responsibility for evaluating all aspects and this is compounded by the absence of a liability regime. Meanwhile, there is a general perception that if GEAC clears a GMO, they would have assessed all these issues comprehensively, which however is not the case! As a citizen, this is the time to assert your rights.

Let us ensure that only farmer-controlled, safe, affordable and sustainable technologies are promoted as real solutions in Indian agriculture

WRITE TO THE ENVIRONMENT MINISTER (moefcc@nic.in) COMMUNICATING YOUR REJECTION OF GMOs, AND GM MUSTARD IN PARTICULAR AT https://www.change.org/p/indian-govt-say-no-to-gm-mustard

A detailed note on why we say NO to this GM mustard is available here.